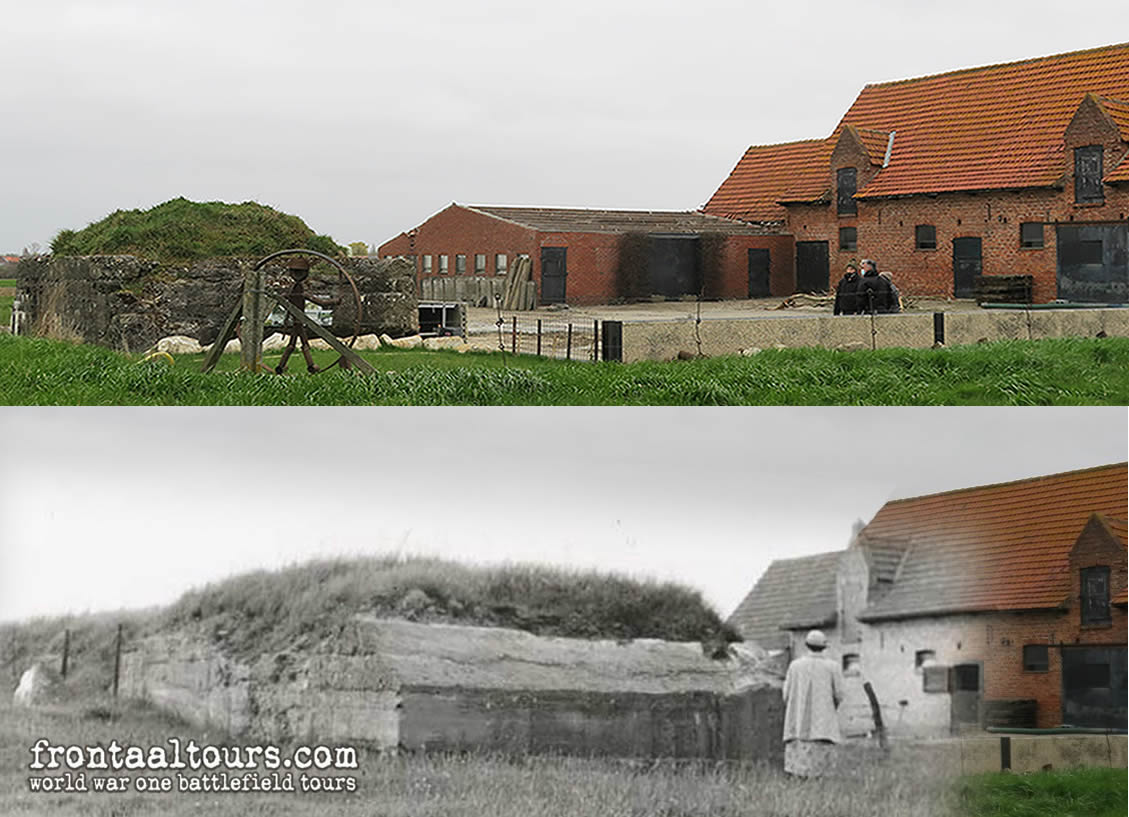 This mainly underground fortification is situated next to the farm at Roeselarestraat 7, with the driveway and chapel located to its right. It is a similar construction to ‘Kazerne 2 Hertog Albrecht'. However, in this case, there was no passage for a narrow-gauge railway.

This structure was probably also used as a first-aid station and to accommodate personnel. Nowadays, only one of the original five chambers still remains.
The front has a thickness of 140 cm. (4.6 feet).
The roof, at its smallest point i.e. above the top of the corrugated iron, still has a thickness of 115cm (3.7 feet). At the back, the thickness is only 24 cm.(9.4 inches)
In the summer of 1961 most of the structure was dismantled. Another similar 6-chamber bunker in the neighbourhood was also demolished in the early 1960's.

A few hundred metres to the north (in the direction of St. Julian), and south of the 'Prinsenhof', there was another pillbox 'Kazerne 1 Graf Haeseler'. This one, measuring 40m. (43 yards) in length and 6m. (6.5 yards) wide, was even larger than 'Kazerne 2'.

History:
The farm and the surrounding area, including the structures mentioned above, were captured by the British on July 31st 1917. Unfortunately they couldn't hold the position and it would take three more weeks before they could finally capture and secure it. The 2/5th Lancashire Fusiliers battalion suffered the enormous loss of 500 of their 593 men.

The Bunker (photos above):

- Upper photos: Notice the thickness of the roof (above the entrance)
- Lower photo: Notice on the left the remains of the doorway to the last but one chamber.
The structure was dismantled right up to that specific point.
Also, note the round eyehole to the right of what was the doorway.

In 1938, a Mr. & Mrs Watson visited the Westhoek area, taking as many photos of bunkers as possible. Their visit included St. Julian and Pondfarm. As you can see in the photo above, the bunker at full length was about 25m. (27.3 yards). In the centre there is a part that was damaged by shelling. When the bunker was being demolished after the war, the surrounding buildings also suffered damage (cracks) from the explosions, so the demolition process was ended.
One part of the bunker remains standing because it was found that heavy explosions in the demolition process were damaging the adjacent building (see photograph above).

LOCATION : detached, on the surface, not built-in

EXTERNAL VIEW :
Back: 1 doorway, current width about 90 cm (35.4 inches)
1 eyehole to the right of the doorway
Front: completely enclosed
Left: demolished in about the 1960's
Right: roof sloping
Roof: flat, chamfered at the side (45 ° over 70 cm = 27.5 inches) / slightly sloping down to the
back / covered with earth and grass

DAMAGE : The largest part of the bunker was demolished (blown up) in the early 1960's. The right chamber is the only one remaining and is hardly damaged.

REMARKS:
Remains of a German shelter (first-aid station, field-hospital, and probably command bunker too.) Originally the bunker was a much larger structure.
Nearby, on the other side of the driveway to the farm, there was another, even larger, WW1 bunker. In the early 1960's it too was dismantled.