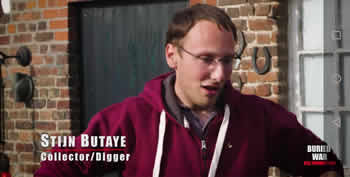 My name is Stijn (born in 1988), from Langemark-Poelkapelle. At the age of twelve I studied electricity for six years at the V.T.I in Ypres and the

V.T.I. from Poperinge. I took a seventh year of specialization. I graduated in June 2007. Since my childhood I have been fascinated by lighting. This is the reason why I went to work at Modular Lighting Instruments. My hobbies are: collecting war material and old postcards; voluntary 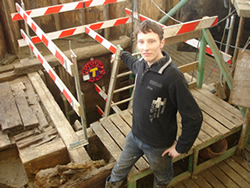 contributions for 'Westhoek Verbeeldt'; creation of a website by Poelkapelle and Saint-Julien concerning the First World War, interested in astronautics (parabolic flight in September 2006, see the website: Gravitation Sound). I grew up on a farm that was at the center of the front lines during World War I. At the time, the farm was known as 'Pondfarm' by the English. It is the region where many battles took place, the battlefield around Ypres, the heart of "Flanders Fields". Here was formed my first hobby: "collecting relics of the war Since 2003, one has found among other things, coins of the year 1853 but also British rifles, bayonets, shovels, lead bullets. , buttons and many types of shells and several types of grenades from Belgian, German, British and French origins. In the region, as well as at home, the dangerous munitions of the war are collected once a year by DOVO (*). (* Service to collect and destroy explosive ordnance) Here you can see me at the entrance to the Vampire Shelter in Zonnebeke. It was an underground corridor with a depth of + -11 meters which was used as a headquarters by the British during the First World War. If you own the book "Beneath Flanders Fields" you can find the entrance there. I still remember the candles on the joists, the spikes on the walls and especially the water seeping in quickly and steadily. You can find more about it here: www.polygonwood.com

At school, I had to create a work of art about war. The choice was obvious: “Pondfarm” of course. Apart from this school assignment, my first 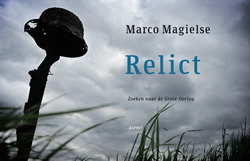 website started. There I show all my finds and discoveries about the war as well as general information about the farm. In July 2008, I went to the Imperial War Museum and the National Archives in London hoping to find aerial photos of trenches, and other documentation and information about our farm and the village of Sint-Juliaan (Saint-Julien) during the Great War. I was lucky enough to find a 1914 photo with our farm. It didn't take long for me to start a website about the villages of Sint-Juliaan (Saint-Julien) and Poelkapelle during the great war. In 2006, I received my first significant web visit: people from the WWI Internet Forum (www.forumeerstewereldoorlog.nl). 20 cars were parked in the farmyard, 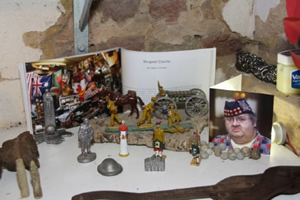 many people from the Netherlands who were interested in all our discoveries and the bunker came to visit us. In 2005, I had started a subject about Pondfarm on this forum, I had already placed the photos that I had found the same day. The visit to the farm was the result. I had found ammunition without knowing what it was exactly, I had asked what it was first on this forum to get information and know the dangers in order to better estimate them! This topic can be found here: Pondfarm topic Since then, I have been getting regular visits from people with similar interests!