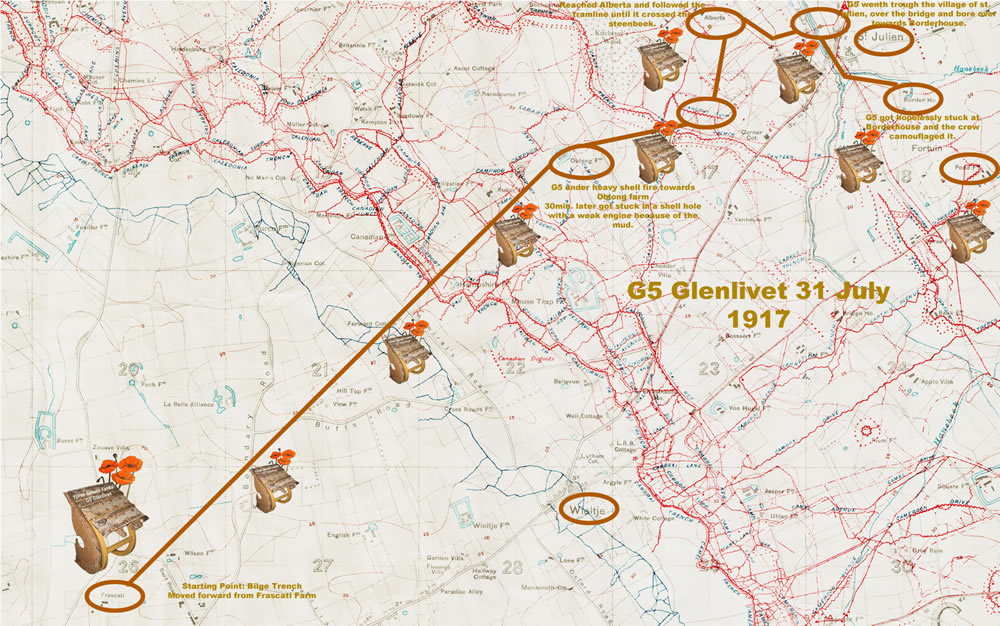 The tanks around St. Julien were from G Squadron. They moved forward from a place called Frascati and their starting point was Bilge trench.

Tank G5, commanded by 2Lt Rider( also known as Coverdale- Rider) working with G3 went forward at 06:00 (zero plus 10). All went well until the second enemy trench when G5 became stuck. It managed to get itself out with the un-ditching beam but this took 1 hour.

G5 got going again and crossed Canopus trench at zero plus 3:28.

37 minutes later the engine began to overheat. The radiator was re filled with water from the shell holes and G5 reached the Alberta – St Julien tram line and followed it until it crossed the Steenbeek at zero plus 4:45.

G5 meets here with G3 and G2 (remember G2 –Lt Mawer gets destroyed later by a direct hit) and it is agreed with the commanders to patrol up and down the Steenbeek AND around St Julien as far as the Hanebeek G5 working with G3.

The infantry were consolidating a line to the St Julien – Poelcappelle road were under heavy shell and sniper fire with the odd MG fire.

At zero plus 6:47 2Lt Rider was outside G5 as the un-ditching beam was almost off, trying to replace it when he noticed two holes through the tank under his left side door and one of the guns in the left sponson smashed in half.
To the left of the tank was a dug out and he went to it and shot two enemy who refused to surrender.

The British infantry were consolidating a line to the Winnipeg – St Julien road and again were subjected to heavy shell fire and MG fire.
G5 moved forward to try and find this MG but the tank was moving at 6 meters a minute and 5.9 shells were dropping all around it – from the direction of Springfield.

At zero plus 7:3 two tanks behind G5 were knocked out by shell fire (probably G2 and G11)
G5 used a hedge along the Hanebeek to approach the enemy and fire on him.

G5 went through the village of St Julien, over the bridge which was only destroyed in the centre and bore over towards BORDER HOUSE. Under point blank range and enemy artillery observation the whole time.

G5 got hopelessly stuck. The crew camouflaged it and sent back a message by carrier pigeon.

All attempts to un-ditch the tank were futile. G7( 2Lt Lovell) was approached by 2Lt Rider on foot and five members of G5’s crew were sent with four MG’s to help him with the infantry.

The infantry had retired beyond G5 to the rear of BORDER HOUSE. 2Lt Rider was knocked out for half an hour by shrapnel whilst sheltering in a shell hole with two NCO’s.

2Lt Rider recovered and brought all the documents out of the tank and made for the rallying point but found no tanks there. He moved back to Wine house and helped a company of Cheshires and Herts infantry, about 90 men. The Lewis gun he was using was destroyed by shrapnel.

He left Wine house and returned to Frascati at zero plus 15:20.