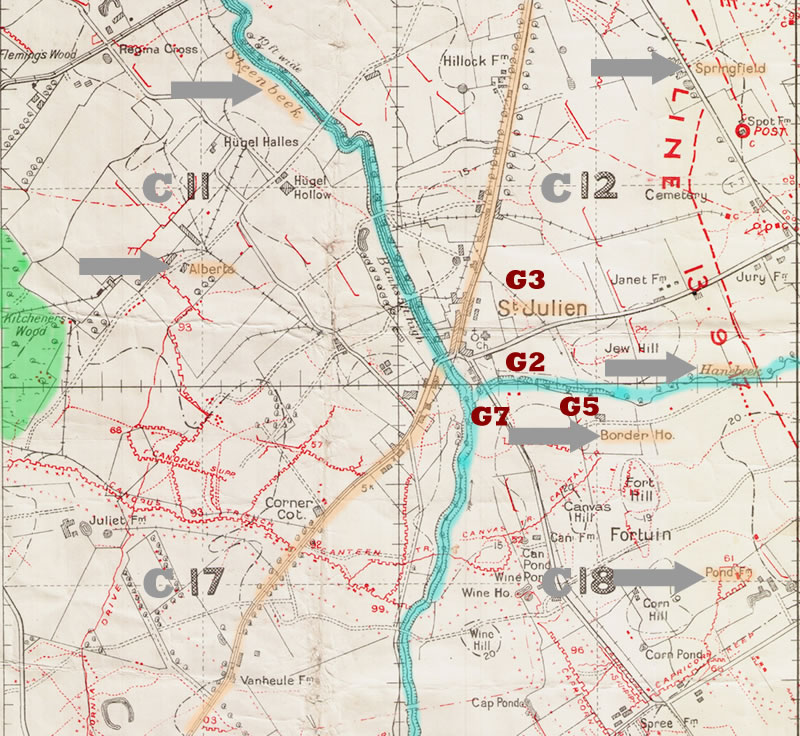 See below the report of Tank commander Lt Rider, very difficult to translate from the original but this will already give you an idea of ​​what this tank has done in Sint-Juliaan. The numbers in brackets are the places indicated on the trenchmap above.

G5 cooperated with the G6 tank. They left at 4 am "in the morning and quickly got stuck. (G16)In the second trench of the German front line they had bad luck a few times for an hour (C11), but eventually reached the Alberta bunker and the Tram line in St-Juliaan and followed it.

While crossing the Steenbeek they meet the G2 and G3 tanks and are thus decided to patrol with G2 around Steenbeek and around St Juliaan, as far as the Hanebeek was in the hands of the infantry that followed a central line of St- Juliaan with the road to Poelkapelle. (C12). The tank was shot at by guns, apparently in the Springfield Farm area. Two tanks were destroyed in the vicinity of G5.G5 tried to destroy these weapons by driving behind them and hiding behind a hedge along the Hanebeek, but got hopelessly stuck near Border House and was abandoned by the Crew. Four crew members were sent away to help the infantry. (C18)At 11:39 the infantry left a new line behind Border House and occupied the tank. The Germans later occupied the G7 tank in the vicinity of G2 on the right. 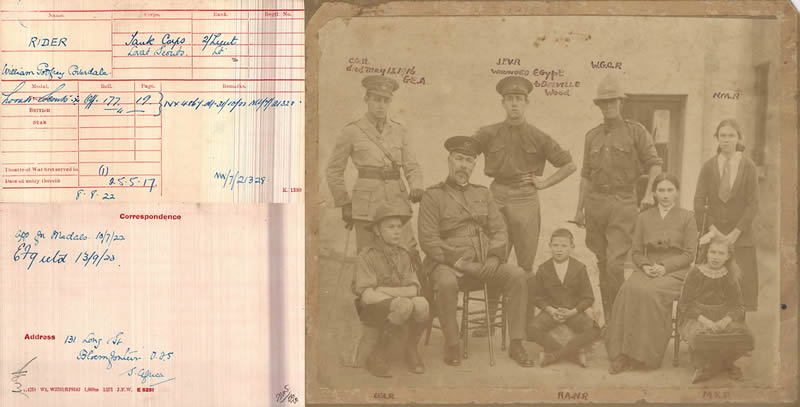 William Wilkinson Rider (1861-1931) sits in the chair on the left; Elizabeth Jane Bell Rider (1870-1950) William's wife in the chair on the right; Charles Geoffrey Rider (1892-1916) their son on the far left; John Francis Victor "Jack" Rider (1897-1977) their son holding his hand on his hip and his other hand on the back of his father's seat (This is Anthony Wilkinson Rider's father, who is on the Sopwith Camel plane in WWI flew); William Godfrey Coverdale Rider died born in 1898, died in 1921 (with his hand on his mother's, Elizabeth's chair); Natalie Millicent Rider (1900-1918) (far right in the back); Edward Grenville Lindsay Rider (1903-1965) sitting on a chair in the front on the left; Robert Alfred "Alf" Nelson Ruiter (1910- unknown) (sitting in the middle); and his twin sister Kitty Ruiter (1910- Unknown) (sitting on the right). This is really a "classic" Rider heirloom. 2nd Lt. William Godfrey Coverdale Rider died in 1921 at the age of 23, he was a South African and Tank Commander of the G5 Glenlivet. Through Geneology the Family of this Lt. Rider found in England and America, on July 31, 2017, exactly after 100, they come to visit the found tank pieces and site at Pondfarm where their great uncle fought.