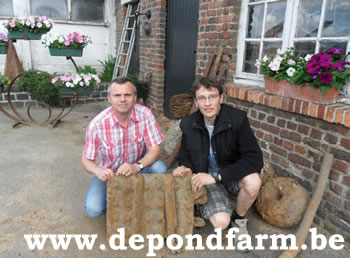 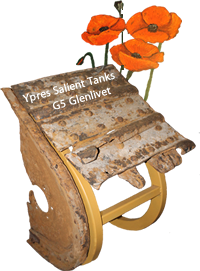 On Saturday June 30 2012, during working activities on the fields of our farm, Pondfarm at St. Julien, we found a piece of caterpillar from a World War I tank.
As you probably read on this website, I have a small museum and this remarkable find will be prominently displayed there as well.

The same day of the find we asked Johan Vanbeselaere from the 'Ypres Salient Tanks' association of Poelkapelle for advice. We wanted to be sure it indeed was a piece from such tank from the Great War and, if so, if more information on this specific specimen could be found. Since the location of this find is firmly identified we thought further identification of the tank was 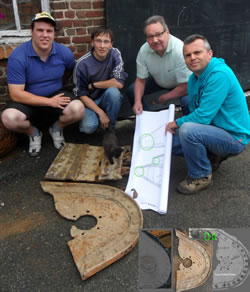 That evening, on aerial photos and trench maps of the war, we found a possible candidate tank. The next day, using GPS coordinates, we could establish with reasonable certainty our find may be a part of a tank which on 31 July 1917 (1st day of 3rd Ypres)reached as far as the 'Steenbeek' (a brook near here), i.e. the G5 Glenlivet tank.
This was a so called 'female' tank of the British G Tank Battalion that patrolled along the "Hanebeek" (a local brook too) but got stuck near Border House and was abandoned there after having been hit. Later Aerial photos of the area show the abandoned tank. However, in cases like this full proof isn't easy to obtain ...

Still it's absolutely obvious these are remnants of such British tank. Further research may eventually reveal more but what we have now points in the direction of this particular unfortunate land ship, as those tanks were called at the time.

The photo above shows Stijn & Johan, of the Ypres Salient Tanks
with the caterpillar piece of the tank.

Two weeks after our first find, after a period of heavy and may rain showers, we did find another part of a tank. This piece, kind of a lid, became visible in a waterhole when being washed by the rainflud. My father saw this thing first and recognized the same type of clinch nails in it as those on the caterpillar find. Apparently it seems to be iron sheeting from the back of the tank, covering the caterpillar. (Whether it was the right or left one has to be conformed yet).
This iron plate, most likely, is from the same tank, the G5 Glenlivet.

Johan Vanbeselaere of the ‘Ypres Salient Tanks ‘again came to take a look at the newest find together with Dirk Vinck. The latter has designed the plan for the tank which is being reconstructed at Poelkapelle. On the basis of a technical plan they were able to decide the find was indeed a part of a tank. (cf. photo).
The photo above shows, from left to right, Brecht Simoens (good friend of Stijn), Stijn, Dirk Vinck and Johan Vanbeselaere with the found tank pieces. 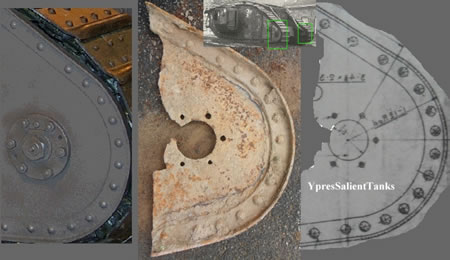 Out of curiosity we went of to see the tank replica which is being reconstructed at Poelkapelle. We compared our finds with the replica, holding them at the chassis and saw they perfectly matched. Our expectations were fulfilled this way.
These finds will be shown in my little museum the way they are depicted on the photo (left to right: Johan Vanbeselaere, George Buyze, Dirk Vinck, Stijn P.) 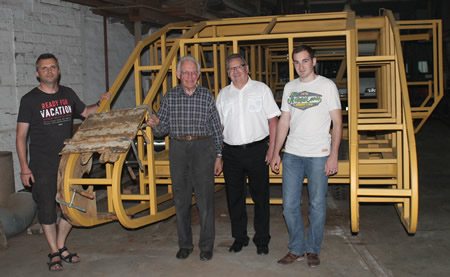 Vist also the website  and facebookpage of the tank!